Burberry: The History and Heritage of the Iconic Luxury Brand

October 9, 2019 | Comments Off on Burberry: The History and Heritage of the Iconic Luxury Brand
Categories: Everything Luxury.

Burberry represents the quintessential upper-class British style. The vision of the brand in pop culture is channeled through its iconic check print and today, this design is one of the most recognisable patterns in the world. This pattern tells a story about class, Britain and many interpretations of ‘luxury’.

Since its establishment in 1856, Burberry has had a fascinating journey that led to its success today. From wartime trenches to football terraces, Burberry has a compelling British fashion story. The brand has undergone various transformations over the last century and a half.

Here are our favourite facts about the iconic brand and best of all its available in South Africa.

Started From The Bottom 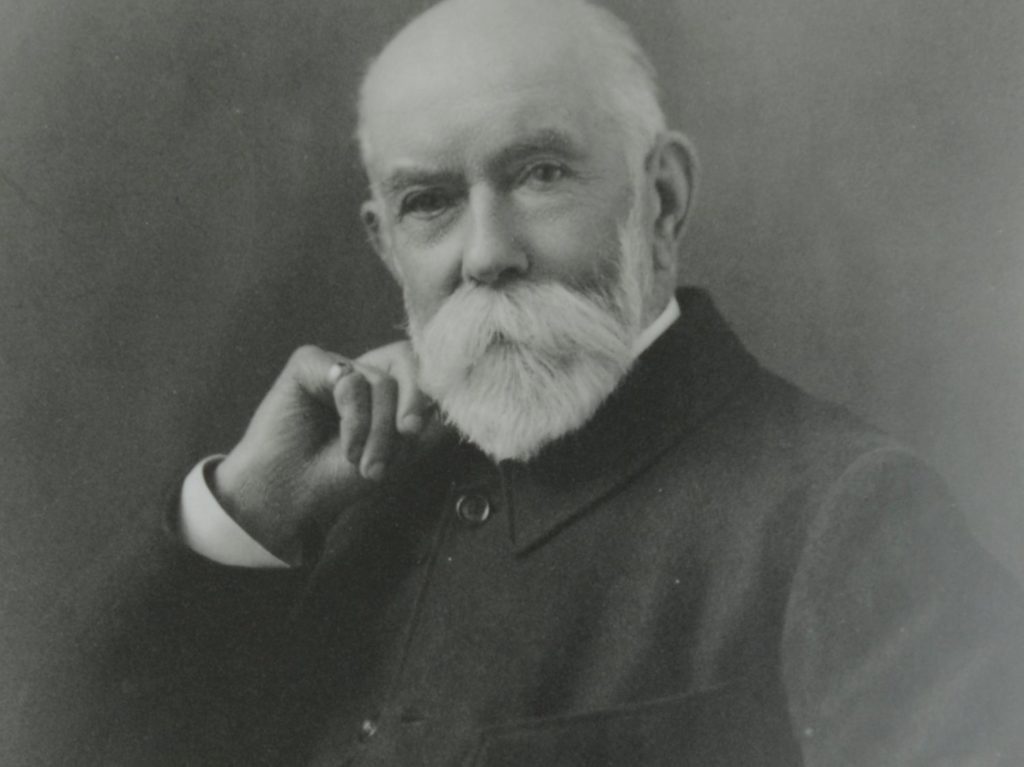 The brand was founded by Thomas Burberry in Basingstoke, England at just 21 years old. The company based its vision on the principle that clothing should be designed to protect people from the gloomy British weather.

Although the brand started in 1856, the renowned ‘gabardine’ material was only invented in 1879 by Thomas Burberry himself. The appeal of gabardine lay in its functionality as it was regarded as the world’s first waterproof fabric.

Even in the 1800s fashion houses were faced with copycats (yawn). However, in 1888 Mr. Burberry patented the unusual material making Burberry the only stockist. Iconic? We know. This material is breathable, weatherproof and hard-wearing. Naturally, this item revolutionised rainwear, which up until then, had typically been heavy and uncomfortable, and not to mention, unfashionable! Therefore, gabardine is the perfect trench coat material and was even known as a lightweight alternative to rubber. 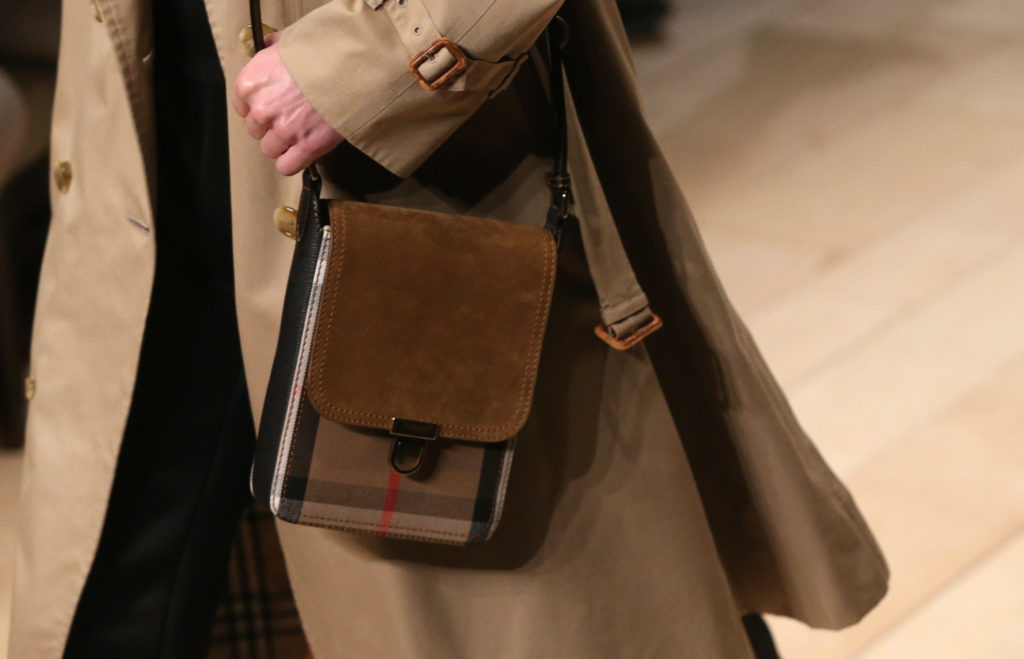 The trench was so trusted that they became standard issue attire for officers during World War I. In fact, this is where the term ‘trench coat’ comes from!

Before the war, these were formerly known as ‘Tielocken’ coats. It featured a belt with no buttons and protected the body from head to toe. The functional design includes epaulettes to suspend military equipment such as gloves and whistles, D-rings used to carry grenades, the gun flap to provide additional protection and the storm shield to allow water to run off it smoothly. From arctic explorers to aviators, everyone who is anyone wore it on their expeditions which naturally promoted the brand exponentially.

In addition, Burberry sponsored a record-breaking flight from Croydon to Cape Town in an aeroplane called ‘The Burberry’ in 1937. Both aviators, Flying Officer Arthur Clouston and Betty Kirby-Green, wore full Burberry ensembles (of course 😉). 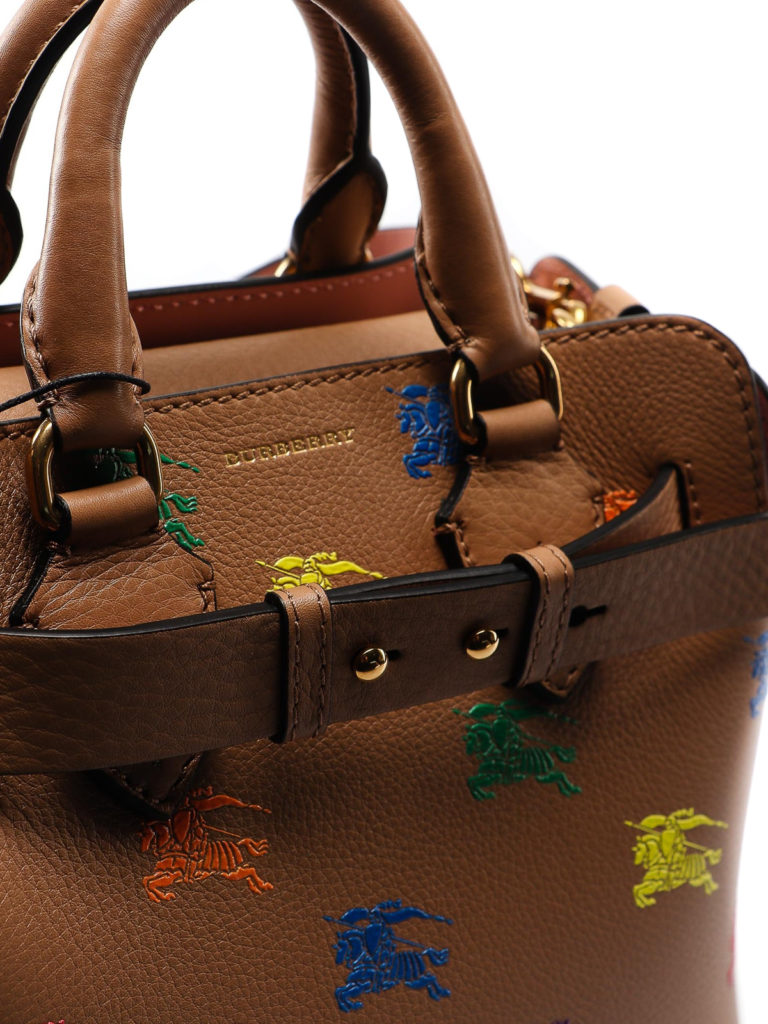 It was only in 1901 that the Equestrian Knight appeared for the first time on the company’s clothing range. The Burberry emblem was accompanied by the Latin word ‘Prorsum’ meaning ‘forward’.

According to the brand, the equestrian stands for nobleness and honour, while the shield refers to protection, reflecting the heavy-duty protection of the gabardine fabric from snow and water. 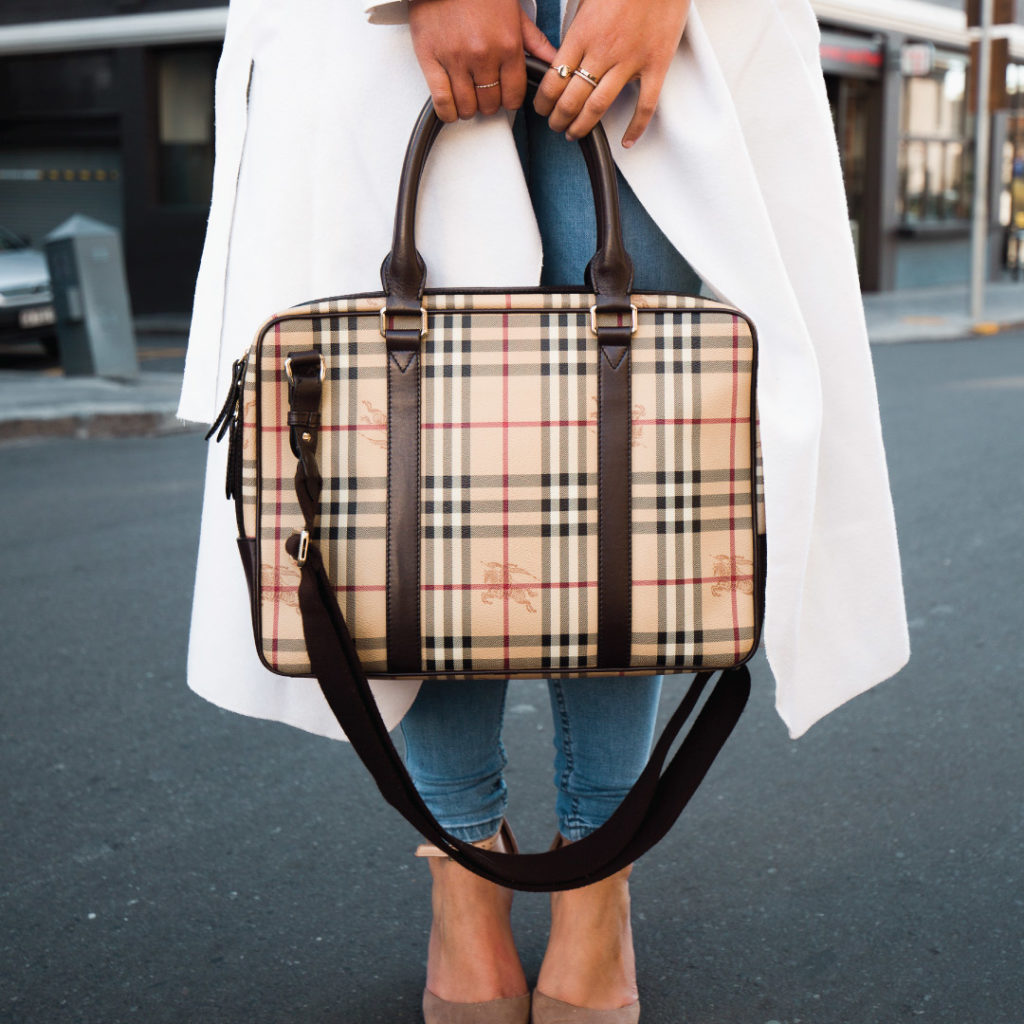 Believe it or not, the brand was making gabardine trench coats for decades before it started to line them with plaid check in the late 1910s, and it was only in the 1920s when the company decided to line the inside of its famous water-resistant coats with a check pattern. In addition, the brand filed for the classic check pattern to be trademarked in 1921, and the design has become notably tied to the brand ever since. This check consists of a beige background with black, white and red intersecting stripes – still today it is one of the most recognisable signifiers of the brand.

Burberry also started making scarves and umbrellas with this pattern in 1967 and in time, it developed into a brand associated with Britain’s upper class – and even the royal family are fans! This granted the brand multiple royal warrants and associating the label’s status as a heritage British house. 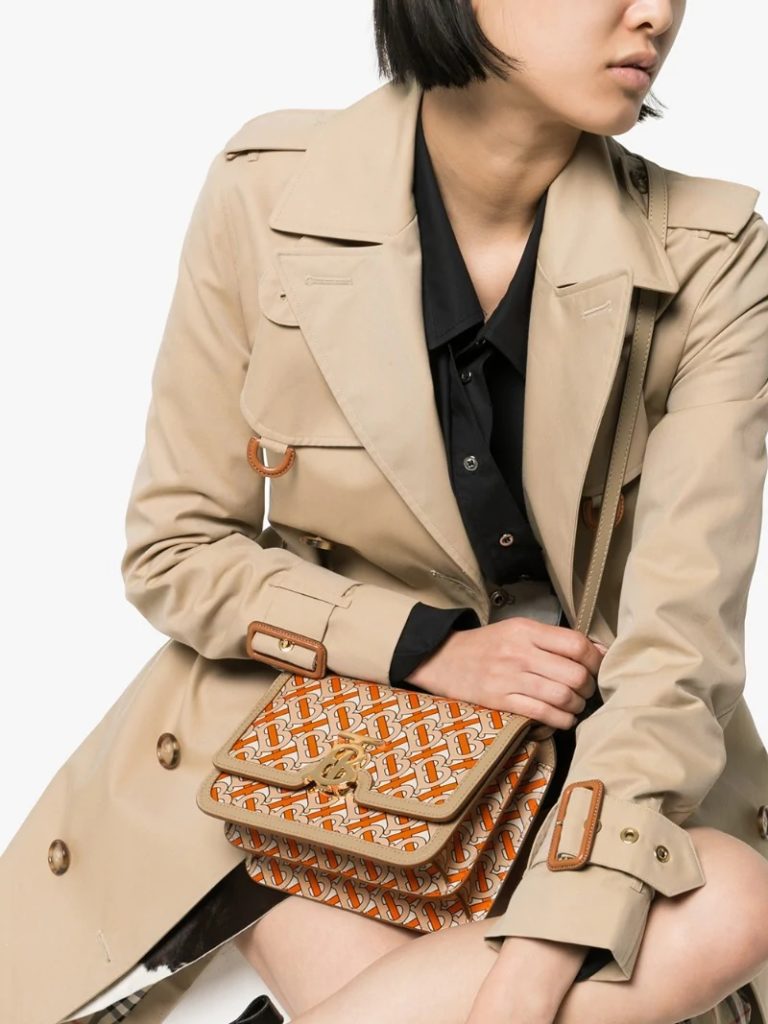 In 2018, Riccardo Tisci was appointed Chief Creative Officer. With this, they also released a new logo and monogram along with art director, Peter Saville.

Needless to say, the new Burberry emblem was quite radical since it did away with the age-old “Equestrian Knight” and named the label in a bolder and more contemporary font.

The creative duo came up with a pattern of interlocking Ts and Bs to make a ‘TB’ monogram, inspired by the initials of the brand’s founder, Thomas Burberry. The monogram, which features prominently in advertising, brought together a striking combination of honey orange, white and, of course, the classic Burberry beige. According to the brand, the monogram was the result of Tisci’s visit to Burberry archives and dates all the way back to 1908.

The new minimalistic Burberry emblem stated the brand name in a fresh font with the text “LONDON ENGLAND” below it.

The brand took to the well-traveled path of minimalistic design approach much like other fashion giants such as Louis Vuitton, Céline, Tom Ford, Fendi or Chanel today, and we’re loving it!

Wondering where to get your hands on your own classic Burberry accessories? Then get shopping on Luxity, of course! We stock only the most coveted Burberry handbags, shoes and other accessories.